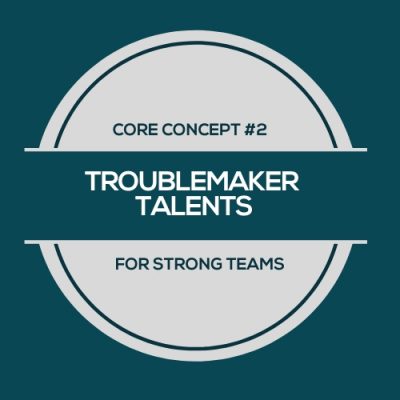 From the S.E.T and “Aspirational You” concepts in the previous episode, we now move towards a seemingly favorite topic for discussion: troublemaker talents!

When talking about strengths, curiosity about the other side -- the so-called “shadow side” or “blind spots” -- tends to surface. And that’s exactly why our next core concept is worth discussing.

Troublemaker talents are natural talents that have the potential to make you great yet may be causing pain or trouble to you, or to others within the team, due to misapplication, talent overuse, or squashing down of talent.

Note that you may be squashing down a talent or not developing it because you don’t see the necessity. But when it does peek out inevitably, it doesn’t come out looking good.

Join us in exploring your potential troublemaker talents, and towards the end you will get these takeaways:

Are These 'Troublemaker' Scenarios Familiar To You?

Let’s say a member of your team leads through Learner and Input. Coming out of such strength is her love for learning, such as data gathering. As she’s bent on really getting to know the stakeholders and the end-users before beginning a project, she spends a lot of time on the front end of the projects collecting stakeholder specifications and end-user preferences. She really digs into these items thoroughly.

What Makes It A Troublemaker Talent?

This is showing up as a troublemaker talent for her because during the process of thorough and in-depth learning, you could see her as being too slow-paced or a “deadline-misser.” This is rooted in the following:

2) Her lack of awareness that would make someone else nervous

What Can You Do As A Team?

As you are following a more sensible timeline, and it’s clear that the troublemaker talent is going to make her miss the deadline, you have no choice but to step in. In this scenario, she’ll keep getting her projects pulled as she’s getting them started because you think she’s not going to complete them on time.

Scenario 2: Digging In Or Intruding?

For this same person who loves gathering information, it also comes out as a talent overuse when she spends most of a meeting with a colleague, asking too many questions -- to the point that she causes skepticism and guardedness on her colleague.

What Makes It A Troublemaker Talent?

While the main point of the meeting is to explore and learn as much as she can, “too much curiosity kills a cat” as they say, and may spell trouble by way of perceived intrusion.

In the end, when the colleague senses that she’s prying into their business, she might not obtain the information she was driving for.

What Can You Do As A Team?

Maximizers also want to think about things longer and improve on them through constant reworks. However, they tend to get stuck on that phase rather than just jumping in and executing it. Naturally they go for the highest quality output, which requires that everything must be thought through. In effect, it keeps them from getting ahead along the timeline. But if high stakes are involved, Maximizers must not let themselves be okay with a B+ work.

Another concept to watch out for in troublemaker talents is the "yin-yang complex" where within a team, we often find talents that look the opposite of someone else's.

Consider the previous example of the leader through Learner and Input. As her boss, you happen to lead through Activator. That means you want to get things moving, and in contrast to her Learner-Input themes, you are really fast on the front end of projects.

Now due to self-awareness or team-awareness about each other’s talent themes, you will know in advance how to handle and address potential trouble. Action steps may look like:

Your Team Challenge: Identify A Troublemaker Talent And Develop It

This challenge may take a little thinking through or some backtracking.

Example Of Turning Around A Troublemaker Talent

Suppose you're a visionary, and while you're passionately presenting about the vision of a project, you feel that your team or a team member is dragging it down into something that's irrelevant. It can be quite maddening.

If you recognize the troublemaker talents in your team, you can avoid the frustrations of being derailed in your vision presentation by talking to that person in advance. Example:

“Hey, I'm going to give you the high level in the meeting, and then let's book an hour after because I know you're gonna have a lot of detailed questions."

So rather than merely point out to them what’s wrong that needs fixing, it’s far more constructive to focus on the team member’s potential. This will inspire them to further develop their strength and to express confidence that they can be among your top talents in the world.

As you both commit support towards this person’s development, imagine the fulfillment for you both if they transform from a “troublemaker” to a superstar!

Bottom line: It's so much more inspirational to craft and develop something that is already strong in you or others than to feel like you need to squash something and stamp it out.

Up next: Learn how to regulate by situation. Stay tuned!