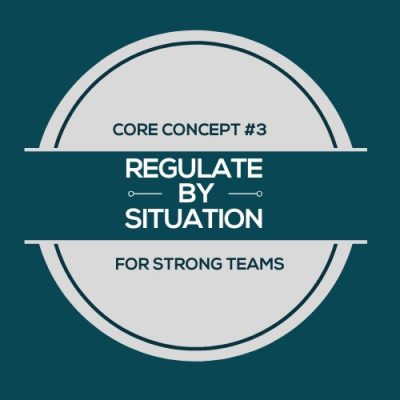 Regulate Your Strengths - A Simple Way:

Imagine you’re in front of a mixing board where you’re looking at your Top 5 or Top 10 talent themes from your CliftonStrengths report. Each of your talents is assigned a fader on the mixing board, so it has it's own level of volume.

To regulate by situation is to adjust your talent theme’s “volume” based on the following:

- The person you're interacting with

- The situation and what it calls for

It’s much like setting putting the right amount of guitar in the mix. For a rock song, it might be the center of attention. For a pop song, there might be a small sprinkle of it, and it's quieter in the song.

Regulating Strengths: From Simple To Complex

While it seems like a fairly simple concept to regulate your strengths, it gets a bit more interesting when we apply it to a team context.

Having to fiddle five to ten faders in order to manage your own talent themes can already be overwhelming.

Imagine how much tougher that would be when, aside from watching over your own set of five or ten, you will now have to consider that every person you interact with -- whether within or outside of the team -- could receive the varying quantities of your strengths in different ways! For example, in certain projects, they may call for a little bit more or a little bit less of that given strength.

If you think about working on this for the rest of your life, it can feel really complicated!

Use The Experiment Mindset To Regulate Your Strengths

The most effective way to not get overwhelmed with regulating your strengths is to think about it as just an ongoing experiment. In particular:

Scenario 1: Communication as a troublemaker talent

In one StrengthsFinder event, a client had five cards representing her Top 5 CliftonStrengths talent themes spread on her desk. Out of the five, there was one card that was pushed off to the side. It read: “Communication.”

Apparently, she could not view Communication as her talent or strength. She had just gone through a series of performance reviews with her manager who elaborated to her what she described as bad feedback on her communication, including:

She resisted when we offered the notion that Communication could be her greatest asset. But coming into the event might as well be her opportunity to apply the core concepts of both troublemaker talents (core concept #2) and regulate by situation (core concept #3), as follows:

Core Concept #2 (Troublemaker Talents) - She needs to recognize that her love for words -- how she values them as important -- are strong points to her communication theme. The reason Communication was coming out as a troublemaker talent for her was that she was talking to think and her manager wanted her to pause before talking so that other people could contribute to the conversation.

Core Concept #3 (Regulate By Situation) - By turning her Communication volume high up all the time and not checking how it is being received by others, she wasn't regulating it. She had to start adjusting it accordingly. Sometimes the team would desperately need her word-craftsmanship. Other times, they would benefit from a lower volume.

In the end, it’s how she operates that can transform her troublemaker talent into a great asset.

In a band, the drummer plays a loud instrument, which tends to make the guitar player, the keys player, and other members to start turning up so they can hear their part and not miss a note. Our founder, Lisa, is the drummer in a rock band, so she loves to use musical metaphors. In live music and in business, this phenomenon of everyone turning up kicks off what is called volume wars.

When this results in a big wall of sound, not every person in the audience will receive it well. Loud is not for everyone.

The same thing happens at work if we think of our talent themes as a collection of variations, nuances, and colors and can be received differently by people. But many of us haven’t recognized those variations and the value of regulating that we turn our talents all the way up to all situations.

Tip: Get a feel of each situation to determine whether you should turn up your strength or pull back a little bit.

Using the strengths volume dial in a team context, how can you regulate your talent themes?

As you play with your own Top 5 or 10 knobs, you also face an almost infinite number of rattling and twisting as you try to find the right mix based on all of the people on your team. That’s how complex and layered it is. But that's why we have our third core concept to remind us that it's all just a matter of adjusting according to the situation!

If, for example, you lead through Individualization, you’re most likely interested in every person and what makes them unique. You’d like to learn everything you can about them so that you can customize your communication in a way that is palatable to them.

If you don’t regulate in your first meeting and turn your talent theme volume right up to a 10, it might catch others off-guard and they might perceive your probing questions as intrusive.

Similarly, if you get into a company that’s focused on standard operating procedures in a highly regulated environment, trying to customize everything might not be well-received. It’s not going to fly. You will want to take that tendency down a notch.

Bottom line: Think of regulating by situation as a general concept. Then, start playing with them like experiments.

Your Team Challenge: Reflect On Your Faders On The Mixing Board

To make this core concept an even more conscious practice yet still a fun experiment to do for your team, encourage these guide questions:

Taking the time to "play it by ear" with your team will make all the difference and will bring out your unique harmony.