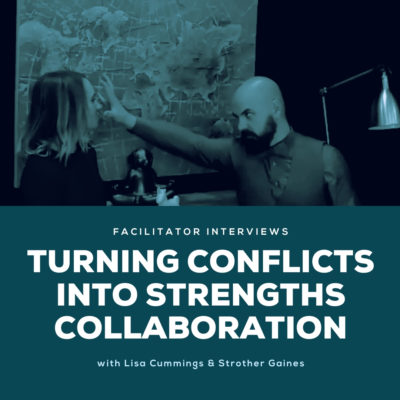 In any work environment, especially widely diverse ones where people with different backgrounds, cultures and management styles work together, conflicts between or among employees can arise. At the same time, every customer seems to come to us hoping for better teamwork and collaboration.

While conflicts are inevitable, they can actually be an opportunity to exercise strengths so that these conflicts turn into a collaboration.

Listen to Lisa Cummings and Strother Gaines as they navigate this conversation about turning conflicts into strengths collaboration:

Lisa: You're listening to Lead Through Strengths, where you'll learn to apply your greatest strengths at work. I'm your host, Lisa Cummings and actually today, I'm back with another episode where Strother Gaines is joining me for a conversation on strengths. And in this one, it is all about conflict and collaboration.

Most people I talked to want to be known as having good emotional intelligence in the office. And when you feel those moments of conflict, that's when it gets most trying. And when we're doing our StrengthsFinder events or CliftonStrengths events with customers, one of the things we hear about often is opposites.

“Oh well, I feel like I think totally different from all these other people on my team. I feel like we live on a different planet sometimes.”

And if you have some of those moments where you really feel that you’ve come to things in a very different way from your teammates, it can definitely make you feel like you would be in conflict.

The good news about strengths is having these strengths conversations, they allow you to see the positive intent from the other side, and not just the positive intent but actually the positive outcomes from being able to use your strengths and then their seemingly opposite way of coming at things and using that to be a more collaborative and effective team.

So without making you wait any longer here's my conversation with Strother.

Lisa: How do you start to take these things where you might have opposites. So let's say you're a —

“Process it in the moment, talk it out, come up with the ideas right now.”

And somebody else is the opposite.

“Hey, let me do my best thinking on it. Let me take a minute with it, give me a beat and then I'll come back and I'll give you much better work that way.”

So I think people can figure out, “Hey, we head-butt.”

But then what do you do with it? Because I love to tell people,

“Hey, that's the perfect partnership, you can plan in advance to be the yin yang to each other. This can actually be great for your collaboration at work”

But then when you're in the moment, and it feels like conflict, what do you actually do or say, to invite the different and not be defensive or not kind of push your way on to someone?

Strother: I think it's setting that conversation up before it gets emotional. This is something that I recommend across the board — partnerships, companies, coworkers, everything before we're in it, before it's —

“You need two weeks and I want to do it right now.”

Having a conversation where we recognize when we get to that place, this is what we're both going to want. So what should we do?

“You never do anything the way I want you to!”

Sitting down and saying,

“You need this. This is what you would like. I'm going to want this, what can we do?”

And then we're not governed by that moment. And we get into that moment you sort of do that in emergency break glass, where you're just like,

And then we've agreed, and we're going to run through with that instead of letting our emotions sort of drag us all around. We already know how we're going to collaborate and work together as a team - before the emotions get heightened.

Don't get hijacked by the emotion in the moment. Plan what you're going to do in advance. Yeah. Because then your intelligent thinking is there.

Strother: Let that logical mind come through and make a plan before you get there. Emotions are wonderful. I love emotions. But we oftentimes are like,

Lisa: Next thing you do is you shut down.

“Fine, whatever you want.”

And that shutting down looks different for everybody. But if you use that logical, brilliant brain of yours beforehand and just put stuff in place, it's so much easier to deal with it when you are hijacked.

Lisa: Which is going to happen...

Strother: Oh yeah. When you try and avoid that emotional hijack, you're actually shutting yourself off to a lot of the things that are the red flags for you. These are important things. This is your body saying you need to pay attention to this.

So you don't ever want to turn off the emotional response, but you don't want to be governed by it exclusively. Everyone thinks —

But that's a horrible disease that people have when they can't feel pain because their body is just being… they broke their arm, they don't know.  If you translated it to work, you'd be wanting to opt out of collaborations altogether and simply work with someone else. Unfortunately, you don't get to pick who you need to collaborate with at every moment, so you need the pain receptors to tell you to work your stuff out.

You need those emotions to flare up and say, “Hey, pay attention.”

But then if you can snap back into your logical brain, you're gonna have a better outcome.

Learn More Ways You Can Use Your Strengths, Invite Strother To Your Team Events

Lisa: I love how Strother framed that up as an emotional flare-up and how wise it is to think through your agreements you're going to have with each other before you're in the moment, before you're amped up, about a conflict.

Being able to have those mature conversations when you're not in the moment, it is a total game-changer. Rather than avoid each other, you can use your opposite preferences to be a collaboration high point.

I've seen Strother work with customers where he has enabled people to open up a conversation that they have not been able to resolve on their own. They had these pent-up frustrations with each other, that annoying department or that annoying teammate. And strengths can create this vehicle for you to actually understand why someone thinks the way they do or why they relate to the team in the way they do or why they bring this totally different priority to bear.

If you've been adoring Strother’s style in this interview series and you want to bring him into your event... If you do a team building or you're building a strengths-focused culture in your organization, feel free to request him when you contact us. He does both in-person and virtual events.

Of course virtual as of the time of this recording are very hot and they could be very timely for bringing a team together when they're under lots of stresses, not just the butting head type of stresses that they're having with each other.

With that, thank you for listening to Lead Through Strengths. We look forward to talking to you next time and helping you claim your talents and share them with the world.

And boy, oh boy, next episode, we're gonna help you do that in spades because the conversation is around, genuinely trying to live your best life. It's a good self-audit to say,

You'll get to find out next time. We'll see you there.

Preventing conflict: Lisa takes you into a deep-dive into the subject matter of conflict in this earlier episode. When you and your team understand the root of most conflict at work, you'll be able to win over moments of conflict together -- or even better, prevent them before they happen. Now that's collaboration!

Work relationship goals: Lisa's previous conversations with Jason Treu and Gary Ware will guide you toward building healthy team dynamics that result in meaningful relationships. If you're hearing a lot of "Yes, but" in your meetings, these resources will be worth your time.

Avoiding conflict? Meanwhile, this tends to be a hot button for people who lead through Command and Restorative. If you've ever felt yourself holding back, you have to honor your strengths again. Your team will surely be nourished by what you offer.

More from Strother: to see the full playlist of our interviews, check out these other five videos we recorded with Strother.