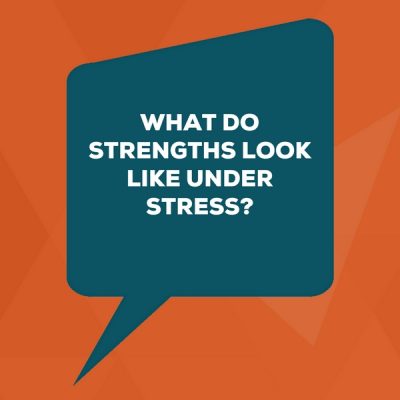 In this episode, Lisa answers the question: What do strengths look like under stress? She shares the three things that might unintentionally bring out the shadow side of your strengths under stress, and then gives you ways to reframe them from bad to better.

Today the question is about whether strengths look or act differently when they’re under stress.

This is such a timely question because I woke up today ... well, not at my best. After an awesome team StrengthsFinder event in NYC last week, I sat next to a prolific cougher and sneezer on the plane. I’m pretty sure he’s the one that passed me this horrible funk that has taken over my body.

Today, I woke up out of sleeping hard. My head hurts. My throat hurts. My ears ring. I coughed all night — as you can probably hear in my voice. And to top it off, my comforter was covered in puke. Not my puke. My dog’s. Apparently, my dog Monkey is also sick today and she jumped in the bed to get me to let her out. I slept through that.

So, why are you hearing this gross story right now? It’s because, no matter how great your life is — no matter how much you love your job, you’ll still have bad days. And you need to know how your talents show up when you’re under stress, when you’re sick, and when you’re burned out. It’s good to know what do to with them on the days that you want to hide under the covers and do nothing.

Like me, you probably have client meetings, deadlines, and commitments that lead you to get out of bed anyway — even on a really bad day. You tough it out. I know you’ve had days like this — where it all seems to be going wrong before the alarm even goes off.

Well, those days can definitely bring out the shadow sides of your strengths. Those days can expose ugly sides of your talents — the side that doesn’t normally show up, even though you haven’t invested fully in that talent. The ugly side doesn’t show up day to day, yet the dark side is way more likely to rear its ugly head when you’re having a terrible week at work.

You get the idea here. Now that you have a couple of examples in mind, here are three stressful situations that might expose the dark side of your talent themes.

Three things that will highlight the shadow side of your strengths when under stress are:

1: Having A Bad Day Or Week —> Your Strengths Can Strengthen You

When things are frustrating, what’s your typical response? For example, maybe you lead through Restorative and you resent the very problem that gave you the bad day (even though you normally get excited about solving problems). Maybe your Learner talent is annoyed because your team moves too fast to give you a chance to become the deep subject matter expert you want to become to put you at your best.

Think of yours. You probably have a thing you get frustrated about or have a typical reaction, regardless of the cause of the bad day.

One way to use your strengths in this situation is to rely on old faithful. Of your Top 5 talent themes, you probably have one that’s easy to call on in tough times.

Maybe your Strategic talent allows you to see simplicity through the overwhelm. So turn up the dial on your Strategic talent today. Maybe your Empathy theme gives you unlimited doses of patience. Or your Focus talent allows you to feel some calm in knowing that you’ll knock out today’s list one item at a time, and that it can keep you on task even with the urgent issues exploding all around you.

So that’s it. When you’re having a bad day or week, rely on one that’s easy to call on. Crank up the volume on a different virtue that can shine through despite the craziness around you.

2: A Person (Or Team) Who Frustrates You —> You’ll Make Good Partners

Think of someone at work who you don’t love working with. If you lead through Responsibility, maybe it’s someone who constantly misses deadlines. For me, I remember feeling eternally frustrated with a woman who treated our sales team poorly.

If you lead through Context, maybe it’s a person on the team who refuses to acknowledge and learn from the failures the team already experienced and you feel that they put the vision out to the organization foolishly because that same vision has failed four times, the only difference is that they called it by a different name each time.

Think about that person for you. Try to concretely imagine a specific person who has been tough for you during your career.

So what do you do about it? One is to identify where, specifically, you think the person is different from you. Even if you don’t know their StrengthsFinder talent themes, just think about what they seem to value and where they’re coming from. As tough as it might seem, assume they have positive intent and imagine a possible positive thing they could bring to the situation.

For example, the person who is frustrated because her teammate misses deadlines could notice (when she looks carefully) that it’s because her colleague wanted to be absolutely sure that the data is correct. He delayed because new information became available, and because he leads through Analytical, there’s no way he would put out misleading data. He’d rather be late than wrong.

In my personal example, think back to the woman who treated the sales team with constant snarky and dismissive comments. Well, when I looked carefully and open-mindedly (and assumed positive intent), I noticed that my team member had an operational focus. She was great at standardizing processes and making us efficient.

So rather than coming at the angle with the frustration about how she treated salespeople, we could first find common value in the fact that she made those rules in order to create a good customer experience. We both valued that. When it came time to solve her problem of the sales people not filling out her forms (which is why she was rude to them), we could use the customer experience to keep our conversation aligned to something we both wanted.

The idea here is that even when someone drives you crazy, there’s a thread of something good that they bring to the team. Look for that thread rather than the irritant.

In many ways, you get what you look for. If you see the good that this person brings and you acknowledge it, they’ll bring you more of that good stuff. And you’ll notice that their way of bringing good stuff is probably not how you love to operate. So you should be celebrating it. You can think, “Wow, I’m so happy someone wants to obsess over the data because I’d rather brush over that and get to the customer messaging” or “Wow, I’m thrilled that someone likes to deliver presentations to customers because I’d rather be off in my R&D think tank, speccing out the next product.”

And amazingly, these are different for each person, so it’s possible to literally swap out your trash tasks for treasured ones. Or you can partner up with someone where you divide out the parts of a project or task so that you each take the part that lights you up rather than the one that highlights your dark side.

Or someone tells me they don’t think their talent is good for them in their environment. For example, a woman recently told me that she gets negative feedback about her Communication talent theme. Her manager told her she talks too much and that she’s coming on too strong for her teammates.

Looking at the team DNA charts, we saw how that could be an easy place for her to feel mismatched because her team was exceptionally high in Relator and Intellection. Most people on the team were academics who were used to communicating formally, and only after having thought deeply on a topic. On the other hand, she likes to talk things out. She actually does her thinking through the act of talking. And she felt like a fish out of water.

She became the go-to on the team for PR and customer communications because her teammates preferred to stay behind the scenes. It was a way for her create value for the organization rather than deciding she should squash it or hide it. As she put it, “Now they like it when I talk a lot because it means they don’t have to talk to customers as often."

Another woman with the Competition talent decided to use her constant comparison to become a cheerleader for the team. She would dig into the metrics, both inside and outside the company, to highlight where other people were their best in their roles or in their industry.

She helped people see that they were good at something that they didn’t even know about. And it showed the team that Competition didn’t mean she wanted to beat them, it meant that she gets a charge out of winning. And that includes helping the company win and helping other team members win in their roles.

To take the “Under Stress” exercise further, explore your talents through the lens of this Yucks inventory. Ask yourself which 1-2 of the words or phrases are hot buttons for you. Then consider what situations call on that “Yuck” often.

It will give you clues about how to avoid it, get less of it, or to reframe it like you did in this episode. Very often, you can address that same situation through another one of your talent themes. Or you can partner with someone who doesn’t see it as a Yuck at all.

View all posts by Andrew Kroeger →

Take the 12 Week Strengths Challenge. It's free. You'll get one "Challenge Question" per week for the next 12 weeks. They help you uncover your hidden potential and maximize your strengths at work. Want to get more out of it? Invite your whole team to sign up. By the way, these questions will work for you, even if you haven't taken the assessment.
We use cookies to ensure that we give you the best experience on our website. If you continue to use this site we will assume that you are happy with it. It's a GDPR Compliance thing =)OkRead more