“Would you lead the Christmas parade this year?” Sure. “Would you be the emcee for the end-of-year banquet?” You bet. “Would you represent the business school at the event in Monterrey, Mexico?” Well of course I would. “Would you develop and deliver a leadership program for a group of 75 non-native English speakers in Shanghai, China?” Absolutely. 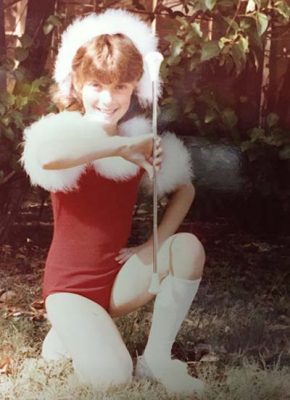 I don’t say these things to brag (besides, in Texas we have a saying that it ain’t bragging if it’s true). Rather, the commonality was being known for, early on, my interest and ability in getting up in front of a group of people in a “performance” to lead an activity of meaning. Whether this was twirling a baton as the leader of the town’s Christmas parade at age 12, leading a school banquet for 300 people at age 17, being a university ambassador for an innovative business school capstone, or figuring out a culturally appropriate and engaging program for leaders in a foreign country, the common denominator was a desire to be “seen” and to be recognized as being important with something of value to share with others and have others feel important too. For me, that’s the strength of the Talent Theme of Significance.

If Significance is a dominant StrengthsFinder theme for you, you probably need to have people like you (think Sally Fields and her Oscar acceptance speech) but in a very authentic way. As my friend Bob Collins once told me, “every relationship has a star and supporting cast”. Significance needs to be the star. While this could just look like an over-inflated ego, especially if in a raw state, I find that it really is about importance rather than ego. It means that you want to work on what matters, on what creates lasting impact, on what is important, and that you get energy from that affirmative response from an audience (whether a size of 1 or 1000). Significance is a deep desire to work on important things, things that are meaningful in the world, and things that will help move you closer to achieving your goal and leave a legacy.

The Superpowers Of The StrengthsFinder Talent Theme of Significance

The gift of significance can mean the potential for being really great at a number of things:
• The ability to discern true impact and direct efforts toward the things that really matter
• Being adept at reading a situation
• Picking up on subtle energy cues
• Being able to process what’s happening in the moment and adjust to keep the attention of the “audience”
• Being able to make others feel the same way – help them see their impact on the world 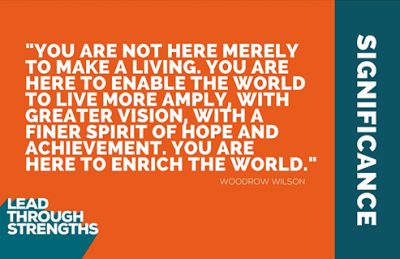 Strengths And Your Career
So I’m thrilled that I have crafted a life where I get to scratch my Significance itch. I get to bring the power of strengths to audiences of all sizes. I get to be up on stage, soaking in an audience’s energy, and delivering the best content in the moment in order to leave them feeling amazing and full of possibility.

We know that strengths don’t exist in a vacuum, and when I re-read that paragraph I can clearly see my other strengths of Maximizer, Communication and Futuristic at play. When I watch myself on film (gah – that outfit that I thought was so cute looks awful on camera), the things that stand out are my energy and enthusiasm. I can see the sparkle in my eyes when I’m sharing the strengths message with other people. I get a huge boost when I see that recognition and “ah ha” moment in their faces. There is a reason that this strength is in the Influencing domain – I find that Significance helps me to coach other people to see their worth, their importance, and their contribution to the world. 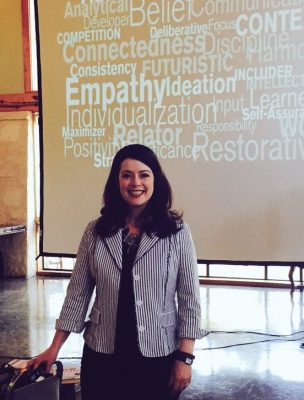 I usually start my StrengthsFinder workshops with an activity called Love-Crazy-Envy and invite participants to share strengths they love, if they have any strengths which drive them nuts (or drive other people nuts!) and then strengths they wish they’d gotten but didn’t (the talent of Woo usually makes an appearance here). But there’s a fourth category that is sometimes unspoken in the group and that is strengths shame. These are dominant talents that emerged which you don’t want broadcast to the world, the ones that you are really questioning as to why they would show up for you. You might even ask to retake the assessment hoping to make those disappear and be replaced with more socially acceptable strengths. For some reason I tend to see people feel that way about the CliftonStrengths theme of Significance more than other strengths.

But here’s the deal – all strengths are just collections of talent. They are neutral with the possibility to be terrific if harnessed and channeled. There aren’t any “bad” strengths or ones that are less desirable. There are frequencies of strengths that differ, such as Achiever being the number one most frequent talent theme and Command being least. Here’s an awesome bit of news – Significance is the next to last least frequently seen strength. So it is really unique in that only 6% of the population have it in their Top 5 dominant talents. So if you have it then wave that banner proudly.

Don Clifton had Significance in his Top 5 and I don’t think that’s a coincidence that he is the father of the Strengths movement. He built a company on the premise that people perform better when they understand their importance and their super powers and can effectively harness that power for greatness.

Managing a Team Member Who Is Naturally Talented In Significance

If you are working with someone high in Significance, seek out opportunities to talk authentically with that employee about their super powers. Craft opportunities for them to get the spotlight, either in a project leadership position or on stage. Also be careful of the downside of Significance. I find that receiving critical feedback can be really difficult. Not because the information is not warranted. It is perfectly acceptable to receive corrective feedback. But rather the difficulty comes in that Significance prides itself on being able to read a situation. When you correct someone, it means that they failed to truly understand the situation. So they might take it really hard. I find that gentle course corrections are much better received and appreciated for Significance rather than tough, heavy-handed feedback. While some people seem to thrive on “tough love,” I find that just absolutely crushes Significance.

Significance Breeding Awesomeness At Work
I hope that sheds some light on the less frequently seen theme of Significance. Just remember that it is awesome, and it wants you to be awesome too, so that together we are all super awesome.

Strengths wizard and creator of strategic people practices that actually work, Ty is honored to have worked with thousands of people from tiny non-profits to Fortune 50 companies in the US and abroad. She is the founder of Osborn Consulting Group, LLC and spends her time bringing the strengths message to the world as well as managing the family ranch in the beautiful Hill Country outside of Austin. Ty reads like a fiend and loves her family, her 17 farm critters, and travel. She also makes a really mean chicken fried steak and gravy. When she runs for President her platform will be synchronizing stoplights and abolishing daylight savings time. Her Top 5 StrengthsFinder Talents are: Maximizer | Significance | Communication |Learner |Futuristic

View all posts by TyAnn Osborn →