From the ages of about 5-9, my dad was building the house that I grew up in. He’s an architect and engineer. He designed and built our entire two-story home, himself. We moved from the city out to the hill country on 5 acres outside of Austin, Texas. We lived in the house while he built it. We moved in as soon as it had a roof and walls. It was all of us—my mother and father, me, my older sister, and my younger brother who was barely 1.

We slept on mattresses stacked on sheets of drywall. Canopies of mosquito nets kept us from being eaten alive in the summer days. We didn’t have doors. We didn’t have plumbing either, so we used Porta Potties outside. We spent our days outside, swimming in the river. We built strong walls of resilience and independence from laughter and adventure. That resilience would support us and keep us safe when life’s storms and unexpected events tried to knock us down. It sounds a little insane to imagine it. It was actually kind of awesome. 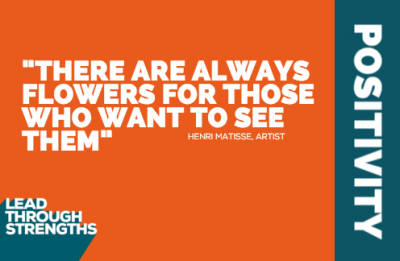 I don’t remember complaining. We took our cues from our parents, who showed us that you could keep the worst stuff out with mosquito nets. We learned that once you slept on a bed made of drywall, you’d have a strong spine and a tolerance for the intolerable. These lessons revealed that we are capable of a lot more than the world would have us believe.

One of my top CliftonStrengths Talent Themes is Positivity. I can definitely see how my mom and dad played a huge role in making me positive. One of the few times I remember complaining, it was our first winter. We still didn’t have plumbing, so my dad bought a shower-head and hooked it to a garden hose. He built a small shower porch at the back of our house. One mid-December day the water felt like icy daggers. I remember squeezing in with my siblings, cursing the person who decided hygiene should be a priority in life.

We screamed in shock every time the water hit us for the first time, and laughed as we struggled to shower in the 40-degree weather. We ran as fast as we could back into the house to bury ourselves under blankets. My parents laughed. We laughed too. Even though it was terrible and miserable, we couldn’t do anything about it, so we laughed at the situation we were in. It was in a “I-will-never-do-this-again,”-“of-course-WE-have-to-do-this,”-“this-will-be-a-great-story,” kind of laugh. It was such an important lesson in seeing the bright side and knowing that the tough spots pass quickly. I don’t even think my parents did it on purpose. 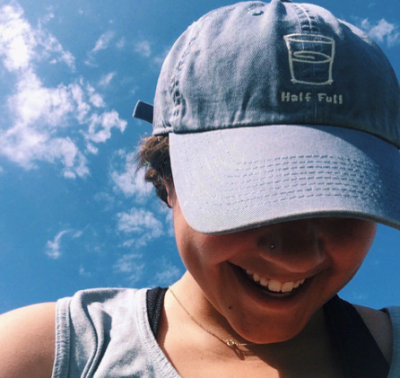 It would have been so easy to cry and scream and be mad at my parents. My mom and dad had their moments of frustration during the house-building era, no doubt. Yet they chose laughter over anger. They chose to see the glass as half full, not half empty. Even today, I have a Life is Good© baseball cap with a glass of water as the image. The caption reads “Half Full.” It makes sense that Positivity is one of my Top 5 StrengthsFinder Talents. I found the hat in our house.

Sometimes Positivity is a difficult talent to have. I’ve experienced many people who don’t appreciate or think highly of positive people. The angst and general crappy-ness of the world can be overwhelming. Getting lost in negativity is too easy. In high school, people saw my positivity as naivety or ignorance. They called it “innocence” as if you can’t be fully human until you’re full of cynicism. But this is what I know: being positive is not a naïve choice; it is a tough choice.

Even though I lead with positivity, I understand that the world can be a difficult place. We often forget how capable we are on our own. We forget how much weathering we can stand, and how much the human race has gone through to get where it is now. When we realize what we are capable of, it is terrifying. And it’s liberating too.

What if fear no longer clouded our beliefs and optimism? What if we squashed negativity so it would no longer keep us from our goals? What if we quit letting naysayers discourage us from being the person we so want to be? What’s wrong with a healthy disregard for the impossible? 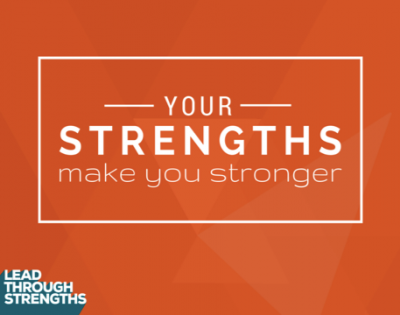 I am the best “me” I can be when I am being positive. When I am “me” I am using my strengths, and I am happiest. I am a positive person because of both nature and nurture. It’s because my parents instilled it. It’s also because I want to live in a world of “half fulls”, and be an example of optimism for those who don’t yet realize how full they are. We are not positive because we are naïve, we are positive because we are resilient.

Positivity isn’t about being bright and sunny all the time, or trying to silver line every bad situation. Frankly, sometimes situations just suck. Positivity is deciding to be partly cloudy rather than dark and stormy. It tells me that even when I’m not having a great day, there’s still a possibility that it could become great. And that’s why I love that it is one of my top StrengthsFinder talents. Positivity makes me strong. Positivity is perspective.

Emma Kypuros is the Creative Development Intern at Lead Through Strengths. Through her Strengths In Action stories, she explores how human relationships impact the world. She enjoys writing, cuddling with her dogs, drinking coffee, and eating avocados, in no particular order. She’s a Global Studies Major pursuing work with NGOs. She’s also chasing a writing career, and as you can see from these stories, it’s already in full force. Check out her TEDx talk called “I’m Sorry.” You’ll see a unique perspective on words and their impact on our lives. Her Top 5 StrengthsFinder Talents are: Ideation | Learner | Input | Positivity | Activator.

View all posts by Emma Kypuros →